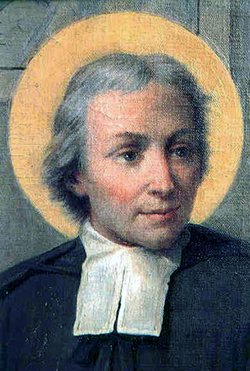 Saint John Baptist De La Salle founded the Brothers of the Christian Schools in 1680 in answer to the serious need for the Christian (specifically Catholic) education of the children of poor and working-class families in Reims, France. These children had nowhere to turn for knowledge, training in a trade, or a Christian upbringing. Saint De La Salle was convinced that the Christian Schools were the solution. Born into a devout and influential family of Reims in 1651, and ordained a priest in 1678, De La Salle, almost by accident, gradually assumed the leadership of a small group of lay teachers in the schools.

Moved by the plight of the poor who seemed so “far from salvation” either in this world or the next, he determined to put his own talents, resources, and advanced education at the service of the children “often left to themselves and badly brought up.” To be still more effective he abandoned his family home, moved into a residence together with the teachers, renounced his wealth and his position as Canon of the Reims Cathedral, and so formed the community that became known as the Brothers of the Christian Schools.

His enterprise met opposition from the ecclesiastical authorities who resisted the creation of a new form of religious life – “lay religious” Brothers, not clerics – a community of consecrated laymen to conduct gratuitous schools “together and by association”. The educational establishment resented his innovative methods and his insistence on free schools for all, regardless of whether they could afford to pay. With profound faith and trust in God, De La Salle acted, step by step, in response to the needs of the schools, the teachers, and the students as he perceived God wanted him to act.

De La Salle and his Brothers succeeded in creating a network of quality schools throughout France that featured instruction in the vernacular, rather than Latin, students grouped according to ability and achievement, integration of religious instruction with secular subjects, well-prepared teachers with a sense of vocation and mission, and the involvement of parents. In addition, De La Salle pioneered in programs for training lay teachers, Sunday courses for young working men, and one of the first institutions in France for the care of delinquents.

John Baptist de La Salle died at Saint Yon, near Rouen, early on Good Friday 1719, only weeks before his 68th birthday. He was canonized a Saint in the Catholic Church on May 24, 1900, and proclaimed Patron Saint of All Teachers of Youth on May 15, 1950.

"…one commitment led to another in a way that I did not foresee in the beginning."
De La Salle

Adapted from original material created by the Brothers of Christian Schools, District of San Francisco. www.delasalle.org Used with permission.